Shoppers at IKEA furniture stores in Denmark now have the option of bringing their purchases home using a fleet of Velorbis bikes with trailers available at no charge. [Story]
UK Cyclists tell bus drivers to keep away.
"Bus companies and Local Authorities need to work together to address these issues."
Manchester's Love Your Bike campaign has released the results of a survey in which they asked Manchester cyclists to rank the types of bus driver behaviour that makes them feel unsafe on the roads. [Story]
Cycling News
Bicycling Your Groceries in UK
"Shoppers using them will be playing a positive role in the environment, not to mention saving fuel and transport costs." 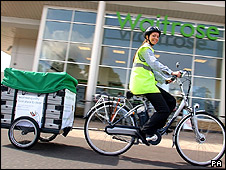 Many of UK's Waitrose supermarkets offer free bicycle grocery delivery as well as bicycle trailers so that customers may take their own groceries home by bike. [Story]
Bicycle-Sharing Program to Be First of Kind in U.S.
"Similar programs have proved successful in Europe. The Vélib program in Paris and Bicing in Barcelona, Spain, both started around a year ago and already offer thousands of bicycles."
A new public-private venture called SmartBike DC will make 120 bicycles available at 10 spots in central locations in Washington, DC. The automated program, which district officials say is the first of its kind in the nation, will operate in a similar fashion to car-sharing programs like Zipcar. [Story]
Five Myths About Drinking Water 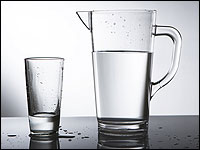 "Myth No. 1: Drink Eight Glasses Daily"
How do you know if you're drinking enough water? Experts say there's an easy way to judge. If you're not thirsty, you're fluid intake is likely "just right." [Story]
Clinton's Traveling Doc Travels By Bike
The long plane rides can be tedious. Ditto for the diversions. Band, like everyone in Clinton's airborne entourage, is required to play in marathons of oh hell, Clinton's card game of choice. Clinton says Band is a good traveling companion, "although I am confident his future lies in medicine and not in cards."
For the past three years, while functionng in his capacity as former president Bill Clinton's traveling physician, Roger Band travels the world in a private jet. But in his other life as an Emergency Room physiscian at the Hospital of the University of Pennsylvania, the 37 year old Band treats up to five gunshot victims a week and pedals to work on a used, one-speed clunker with a bell that reads "I love my bike." [Story]
Fat People Cheaper to Treat, Study Says
"This throws a bucket of cold water onto the idea that obesity is going to cost trillions of dollars."
--- Patrick Basham, Johns Hopkins University
Preventing obesity and smoking can save lives, but it doesn't save money, Dutch researchers reported. It costs more to care for healthy people who live years longer. The researchers found that from age 20 to 56, obese people racked up the most expensive health costs. But because both the smokers and the obese people died sooner than the healthy group, it cost less to treat them in the long run. [Study]
Oui, like this idea.
"Startup and development costs were high, but as the service spreads to other cities, we can expect some economies of scale."
Thousands of commuters in Lyon, France, are using pedal power instead of gas, under an ambitious new program that lets people rent bikes from public racks at low cost. In just three months, the program has signed up 15,000 subscribers who take 4,000 trips a day and travel over 24,800 miles a week on 2,000 public bikes at 150 bike stations.

Technology helps, a microchip exchanges information with electronic bike racks, identifying the bike, the subscriber and when it was rented and returned. The bikes have sensors that check the brakes, lights, tire pressure and gears every time they are parked, sending out mechanics or a shuttle to move bikes from one station to another as needed. Currently weekday rush hours see the greatest demand, indicating that people are using the service to commute. On weekends, there's a 2 a.m. rush. The cost is 1 euro ($1.20) an hour, but there is no charge for the first 30 minutes. Since 90 percent of trips take less than half an hour, most subscribers pay nothing.

How to save your knees
Colorado orthopedic surgeon Dr. James Holmes says there are three things you must do to strengthen your knees, "Bicycle, bicycle and bicycle." It is essential, however, to be properly fitted on a good bicycle. If the person selling you a bike isn't measuring your legs, knee angles, etc., with rulers and plumb lines, go somewhere else.
Motorola unveils bicycle-powered cellphone charger
Motorola has announced a bicycle-powered cellphone charger aimed at Third World residents who lack regular household power supplies. Many people overseas live in areas where regular power feeds are scarce. As a result, simply charging a cellular phone becomes a problem. Motorola hopes to use the bicycle charging system to tap into the more than 500 million Chinese people who ride a bicycle as their primary mode of transportation.
Tracking the elusive urban cyclist
Portland State University professor of urban studies Jennifer Dill is planning to put global positioning systems on 175 Portland, Oregon cyclists. She hopes to learn whether cyclists go out of their way to use bike lanes and bicycle-friendly streets and to see how travel habits are affected by such factors as weather. The study is being financed by the Robert Wood Johnson Foundation with the hope that results can play a part in helping to encourage bicycling for short trips.
Australian Pedal Sales Exceed Motor
"Australians are using bikes not just for recreation but increasingly as their preferred form of day-to-day transport."
1,273,781 new bikes were sold last year, well ahead of the 962,521 new cars and trucks. [Story]
Half of China's Urban Residents Bike Commute
"When urban residents go out, one third will walk, less than one fifth take bus, one tenth choose other vehicles, and about a half ride bicycles."
About half of Chinese urban residents continue to choose bicycles for commuting despite fast development of public transport over recent years. [Story]
Ohio Standardizes Bicycle Laws
"We're seeing people travel more by bicycle, and they were potentially breaking the law just by crossing a city line."
State Rep. Mark Wagoner
An Ohio law that standardizes traffic rules for bicyclists statewide and forbids municipalities from banishing bicycles to sidewalks or trails takes effect tomorrow, ending what cycling organizations say was an often conflicting patchwork of local regulations. A summary of the bill's changes can be viewed online. [Story]
Fastest commute in Edinburgh? Pedal.
"This is a really worthwhile event which illustrates that there are many transport options available for those coming to work in the city centre."
Ricky Henderson, Edinburgh city council
A race to find the fastest way through Edinburgh during rush hour saw bicycles leave other modes of transport trailing. Bikes won out over cars, buses and trains in reaching their destinations in the fastest time from a variety of places around the city - leading the event's organisers to declare that cycling into work is the fastest, cheapest and most efficient way to get around the city. Maggie Wynn, the co-ordinator of TryCycling, a bike-riding pressure group in Edinburgh that helped to organise the Commuter Challenge event, said: "I'm sure these results will come as a surprise to a lot of people. And I think it will encourage them to get on their bikes instead of automatically jumping into the car."
Los Angeles Living, Without a Car
Chris Balish is the author of the new book "How to Live Well Without Owning a Car: Save Money, Breathe Easier, and Get More Mileage Out of Life." Listen to his August 15 interview on NPR's Morning Edition with Renee Montagne about how to live without a car, even in Los Angeles. [Interview]
JCDecaux to roll out city bike hire scheme to capitals
"The Lyon trial proved to be a success, with cyclists being asked to register with a credit card to ride the bicycles for free for a limited period, before incurring a small charge afterwards."

Outdoor advertising group JCDecaux is planning to roll out its subsidised self-hire bicycle scheme across one third of the 1,500 cities in which it operates. According to media reports, Paris, Brussels, Barcelona, Toronto and New Delhi plan to participate in the scheme, which JCDecaux said is designed to appeal to city planner's concerns about increasing traffic pollution. [Story]
A killer design from Kentucky
How is it possible that something like this can be approved? It is hard to imagine a way that a single graphic could convey more dangerous and erroneous messages- for cyclists, motorists, and runners.

State of Kentucky License Plate.
Try Bicycle Commuting
Ohio judge reluctantly upholds right of cyclists to slow down automobile traffic
"A bicycle proceeding as quickly as safely possible albeit at half or less the pace of motorists, is not in violation of the slow-speed prohibition."
It's hard to support the manner in which the cyclists pressed the issue, but the ruling is very interesting, especially with the judge's comments on the need for clarification in the legislation. Upsetting however, is the comment from the arresting officer Randy Gray following the trial, "Obviously they haven't experienced road rage if they think it's safer to ride in the middle of the street." Perhaps the only thing obvious is that Officer Gray is in the wrong line of work.
Finding a bicycle's place on the road
He handed me a bright yellow manual written by John S. Allen called Street Smarts.
This reporter for the Southeast Missourian does a better job than the typical "It's a slow day" bicycle story, even though he views bicycle use as only recreation. Like so many of these stories, it always amazes to read some of the statements from those calling themselves "cyclists." For example this gem by a woman who says she was an avid cyclist and then comments on what she sees as the two choices when cyclists get in the way, "I don't feel I should have to make the choice between putting myself in danger by crossing the middle line or running a cyclist off the road." How about choosing to swerve off the road and into a tree, sounds like that might be the best choice for everyone's sake. No? Ok, then maybe the choice to wait until it is safe to pass, just as you would (maybe not, in your case) when behind any other vehicle.[Story]